3 essentials solutions to equip your private lifts Find out more

The second historical product we would like to introduce to you is the ECOSIL automatic lift door. This door contributed to the development of the SLYCMA modernisation activity. An activity which is now our main expertise.

ECOSIL, the economical and quiet automatic lift door joins the SLYCMA range ! It is driven by the ECOSIL 1 car door. The key word for this development ? STURDINESS ! 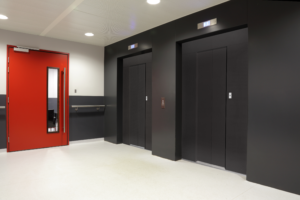 Although ECOSIL was initially designed for the creation of lifts, its dimensional adaptability was quickly appreciated for modernisation projects.The famous SLYCMA five-legged sheep and the historic slogan “From standard to singularity” were born from this.

Extras tailored to YOUR needs

We based ourselves on the same observation as for the swing doors : the request is focused on aesthetics. We have therefore developed a glazed version of the ECOSIL door for transparent lifts. 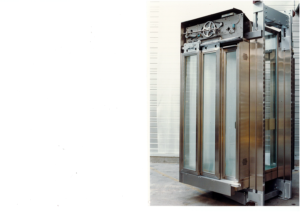 While the sheet metal version was very popular for modernisation work, the glazed version has conquered the market for the creation of lifts in both residential buildings and commercial buildings.

Lift doors are sometimes exposed to high levels of humidity whether they are installed outdoors (seaside) or in industrial sites (food processing plant). For these types of environments, we have designed a waterproof option for our ECOSIL door. It was released on the market in 1994.

1998 : Novelty on the drive side of the ECOSIL landing door

Since 1987, the ECOSIL door has been driven by our DYN operator (crank rod). In 1998, it was replaced by the JET operator. This new equipment with frequency variation allows from now on a true piloting of the car door. For the passengers a more comfortable use and for the lift operators an access to adjustments such as speed, closing time etc…

We also started providing our lift doors with flame-resistant glazing at this time.

2002 : The JET-S operator for your special projects

To meet  the growth of the retrofit market, the project to create a SLYCMA operator that can handle different types of skates was launched.
The JET S not only meets your dimensional requirements but can also be used to face most landing doors on the market. 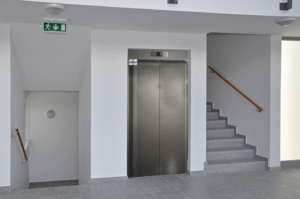 The JET-S operator will replace the JET operator in 2008 and will drive our standard and special automatic lift doors.

From 2015, the ECOSIL door will gradually be replaced by two new models : the RHEA landing door for modernisation and the GAIA door for freight lifts, heavy traffic and vandal-resistant level 2 applications. 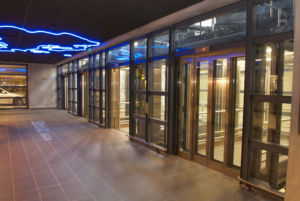 For your modernisation or retrofit projects, you can find the right door for your needs right here.

Want to know more about our doors ?